Dr. John Tracy, former CTO of Boeing Corporation and recipient of the 2014 International von Karman Wings Award, has established an academic scholarship in 2018 in memory of his mother. The Victoria Alegria Tracy Scholarship will be given annually to a student in Aeronautics or Space Engineering or in a related science who shows exceptional promise in advancing his or her field. 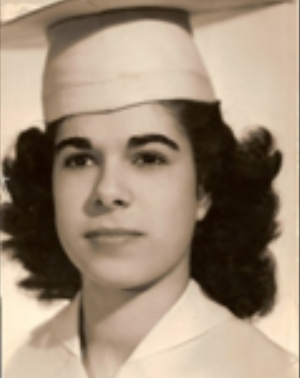 Victoria Maria Alegria was born in 1924 in Los Angeles to Angeles and Jose Alegria. Raised in the Boyle Heights neighborhood of East Los Angeles, Vicki was very outgoing and loved playing all types of sports. From an early age, she was a great persuader and connector of people. After graduating from Catholic Girls High School, she worked as a bank teller in Los Angeles and while there met John Wesley Tracy. They married in 1948 and had two children.

In the mid 1970’s, at age 50, she entered the work force again doing property management. She had a great 35 year career, retiring at age 85. In her later years, she enjoyed meeting with students and helping them financially with their educational pursuits.

Mallory Neet is a Ph.D candidate in the Caltech Hypersonics Group working with Professor Joanna Austin. She is originally from Lawrence, KS and received a M.S in Aeronautics from Caltech in 2016 and a B.S.E in Aeronautical and Astronautical Engineering with a minor in mathematics from Purdue University in 2015. Currently Mallory’s research is focused on studying high-speed fluid structure interactions in the Caltech Ludwieg Tube.

Cecilia Huertas Cerdeira is a PhD Candidate in Aeronautics. Her research is focused on understanding the coupled and non-linear interactions between elastic bodies and fluids in a variety of settings. Her PhD thesis aims to exploit the elasticity of thin plates with two objectives: to improve the performance of wind energy harvesters through the use of flapping instabilities and to design fish-inspired propellers for unmanned underwater vehicles that result in higher efficiency and maneuverability with reduced noise levels. Cecilia earned Bachelor’s degrees in Aeronautics from Universidad Politécnica de Madrid (Spain) and Ecole Nationale Supérieure de Mécanique et d’Aérotechnique (France) in 2014. She received a Master’s degree in Air and Ground Transportation from ENSMA in 2014 and a Master’s in Aeronautics from the California Institute of Technology in 2015.

The Aerospace Historical Society established an Academic Scholarship in 2010 in memory of its founder Dr. Shirley Thomas. The award is presented annually at the International von Kármán Wings Award banquet to a student in aerospace engineering or a related science that shows promise for continued future contributions to the field. 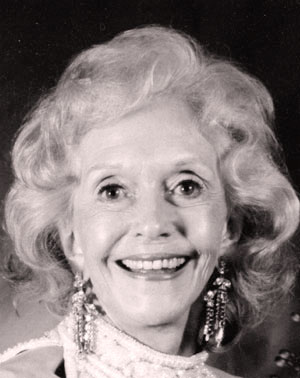 Shirley Thomas Ph.D. was a woman of many talents a radio/television actress/writer/producer, author, and professor at the University of Southern California.

Born in Glendale, California, Dr. Shirley Thomas earned her B.A. in 1960 and her Ph.D. in Communications in 1967 from the University of Sussex in the UK. She was also awarded a diploma by the Russian Federation of Cosmonautics in 1995.

Dr. Thomas was so impressed by Theodore von Kármán's genius that after his death, she set out to get a U.S. Postage Stamp issued in his honor. It took her 26 years, succeeding in 1992. She also founded and chaired the Aerospace Historical Society in 1984 the society has presented the international Von Kármán Wings award to outstanding and innovative contributors to the world of aerospace.

Dr. Thomas was also a prominent figure in the early days of the United States Space Program. She was the recipient of the Air Force Association's Airpower Arts and Letters Award and in 1991 she received the Aerospace Excellence Award from the California Museum Foundation and a Fellow in the British Interplanetary Society.

Dr. Thomas was an Associate Fellow and advocate for the national Society for Technical Communication (as well as the local Los Angeles Chapter, LASTC), she taught "Technical and Fundamental Writing" in the Master of Professional Writing Program at the University of Southern California for well over three decades. In an article from the LASTC the Technograph she wrote: "In the wondrous world of tomorrow, where we all will be speeding along the information Superhighway, and like spiders we will be climbing the World Wide Web, the capability that can prove most stabilizing is that of technical writing. This is a talent diligently acquired, infinitely useful in any form of communication, and valuable to any application. That is the best kept secret of technical writing."

Ryan McMullen is a PhD candidate in Aeronautics working with Professor Beverley McKeon. His research focuses on using low-order models to improve understanding of wall-bounded turbulence. Previously, he has investigated the dominant structures in strongly viscoelastic turbulence of dilute polymer solutions, as well as nonlinear interactions in turbulent channel flow. Ryan earned a B.S. in Aerospace Engineering from The Ohio State University in 2013 and an M.S. in Aeronautics from Caltech in 2014. Additionally, he participated in the GALCIT-École Polytechnique exchange program, obtaining an M2 in Fluid Mechanics in 2015.

Fabien Royer joined the Space Structure Laboratory at Caltech in June 2016, after receiving his Master of Science in Space Engineering from Caltech, as well as his Diplôme d’Ingénieur (Engineering diploma) from ISAE-SUPAERO (French national institute for Aeronautics and Space). Aside from his academic path in France, Fabien was involved in CNES (French Space Agency) PERSEUS program in which he was in charge of the mechanical design of a two-staged experimental rocket. He received the PERSEUS best innovation prize 2016 for his new design of a rocket/ramp mechanical interface. He also attended CNES/Arianespace and ESA summer programs where he got involved in a study for a Mars sample return mission and a phase 0 design for an in-space gravitational wave detector. While at Caltech, Fabien worked on the Autonomous Assembly of a Reconfigurable Space Telescope (AAReST) project and he is currently working on the Space Solar Power Project (SSPP). His research investigates the instabilities and buckling phenomena of extremely thin shell structures used in large deployable spacecrafts. Fabien was also co-chair of the Caltech Space Challenge 2019.

Silken Jones is a 4th year graduate student in Aerospace and has been working in Joe Shepherd's laboratory since completing her MS degree at Caltech in 2016. Silken earned a Bachelor of Science and Engineering from Princeton University in Mechanical and Aerospace Engineering in 2015. She was an intern at JPL in the summer of 2015 and has broad interests in the engineering science field. Silken is currently working on a project funded by Boeing on developing innovative methods for evaluating flammability and combustion hazards in aircraft. Her work is relevant to both design and certification of aircraft. She recently presented her paper on ignition at the International Symposium on Combustion.

David Huynh, an aeronautics graduate student working with Professor Beverley McKeon, received the 2015 Shirley Thomas Academic scholarship. David received his bachelor’s degree in aeronautical/astronautical engineering in 2009 from the Ohio State University. Currently, his research project is concerned with the control of wall-bounded, turbulent flows, particularly in the context of passive, compliant surfaces. He is designing an experiment to study the effect of a compliant surface on an artificially generated mode in a turbulent boundary layer. This research seeks to further the understanding of turbulence and provide a reduced-order tool to guide the design of future control techniques. David is supported by the Foster and Coco Stanback STEM Fellowship, for which he is involved outreach targeted at highly motivated community college students. The opportunity to guide, teach, and learn from these students have been an invaluable part of his graduate experience.

Morgane Grivel, an aeronautics graduate student working with Professor Mory Gharib, received the 2014 Shirley Thomas Academic scholarship. Her PhD thesis research is focused on understanding how a surface's wetting properties can modify flow behavior. She is currently studying two dimensional water jets flowing over surfaces with alternating hydrophobic and hydrophilic bands. These patterned surfaces induce passive hydrodynamic displacements and create roller-like structures in the flow. This research has the potential for new methods for flow control with applications for the future surface and submerged watercraft. Morgane was born in France and moved to the United States as a child. She attended the University of Maryland for her bachelor's degree, graduating in 2011. She obtained her master's degree in Aeronautics from Caltech in 2012. She also took part in the GALCIT- Ecole Polytechnique exchange program and obtained a master's degree in fluid mechanics from the Ecole Polytechnique in 2013.

Keith Patterson, an aerospace graduate student working with Professor Sergio Pellegrino, received the 2013 Shirley Thomas Academic scholarship. He has been developing a new active, lightweight, deformable mirror technology. This mirror technology has potential for enabling new large space telescope architectures that could be used for exoplanet imaging, the study of dark matter, earthquake monitoring, and other areas of research. He is originally from upstate New York, and graduated with a bachelor's in mechanical and aerospace engineering from Rensselaer Polytechnic Institute in 2007. He got his master's in aerospace engineering from GALCIT in 2009.

Nicholaus Parziale, an aeronautics graduate student, was awarded the 2012 Shirley Thomas Academic scholarship. His current research focuses on supersonic and hypersonic flows, specifically novel ground-test methodology and optical diagnostic development. Nick was born and raised on Long Island in NY, and received his bachelor's in mechanical engineering from SUNY Binghamton in 2008, then received his master's degree in Aeronautics from Caltech in 2009. He is looking forward to contributing to the fields of aerospace and sustainable energy.

Gwendolyn Johnson, an aeronautics graduate student working with Prof. Michael Ortiz in GALCIT, was awarded the 2011 Shirley Thomas Academic scholarship. Her work in robust collision detection, algorithms for simulating non-smooth contact interactions, and optimal control is motivated by her desire to understand, design, and optimize self-assembling space systems. She has applied several numerical tools to optimizing the design of an autonomous reconfigurable space telescope. She earned a bachelor's degree in civil engineering from the Massachusetts Institute of Technology in 2008 and a master's degree in aeronautics from Caltech in 2009.

Philipp Boettcher, a graduate student in GALCIT, was awarded the 2010 Shirley Thomas Academic scholarship for performing novel research on thermal ignition mechanisms. Philipp received his bachelor's in aeronautics and astronautics from Purdue University and joined Caltech as a graduate student in 2006 to pursue his PhD. He has also exhibited excellent mentoring and leadership qualities.